School For Contemporary Dance & Thought
<<<BACK TO FESTIVAL SCHEDULE
​ 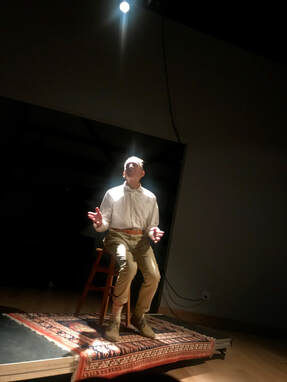 
During the three hour class we will investigate/explore the challenges present when composing moment to moment. Hopefully, we bring to each moment a lived experience of attention.  My proposition for attention is this - 'What if each choice, articulated thoughtfully, is the only one which could have been made?' We enter into composing aware of relationships—the moving, composing physical presence to a space/location/context, to time, to the layers of felt information being received—moment to moment.
Come dressed to move.


PETER B. SCHMITZ has been involved in the creative and performing arts for over four decades as an actor, dancer, choreographer, and educator. With an MFA from Smith College, Peter has served on the Theatre and Dance faculties of Middlebury and Amherst Colleges and has held residencies at many universities. As a professional dancer/choreographer, Peter has worked throughout the United States and in Holland, Germany, France, England, New Zealand and Turkey. He was a founding member of Dance Gallery, a small modern dance company, a member of Creach/Co in New York City for over eight years, and has performed in the works of Wendy Woodson and Present Co., Yanira Castro/acanarytorsi (Bessie nominee for performance 2013), Tamar Rogoff, Richard Colton/Amy Spencer, Jim Coleman and Terese Freedman/Freedman Coleman Dance, and, most recently, he is touring with Ann Carlson in doggie hamlet. He received a “Best Performance” award in the San Francisco Film/Video Festival for his work in a film by Wendy Woodson, “Trout”. He has choreographed for New World Theatre, Medicine Show Theatre and Potomac Theater Project and is a member of Actors Equity. Peter is on the Board of Directors of A.P.E. (Available Potential Enterprises) in Northampton, MA, and he teaches and performs internationally. He lives at Bramble Hill Farm in Amherst, MA with his husband Joey Schmitz.
​
Click here to register