Chi Cultivation - A series of movement and breath exercises that articulate the spine, work the muscles, and touch all the meridians of the body. These practices raise your physical energy, as well as your consciousness, and build strength and vitality while moving through space and interacting with others.
​ 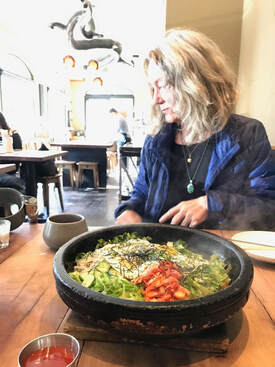 Sara Shelton Mann has been a choreographer, performer, and teacher since 1967. She was a protégé of Alwin Nikolais and Murray Louis in New York City before moving to Canada where she met Andrew Harwood and fell in love with Contact Improvisation.

In 1979 she moved to San Francisco to work with Mangrove, now Mixed Bag Productions, for which she serves as artistic director. One of its early manifestations was the company Contraband, launched as a performance group and research ground combining the principles of contact, systems of the body and spiritual practice into a unified system of research.

Among her awards are a John Simon Guggenheim Fellowship, 7 Isadora Duncan Awards, including a special achievement award for “erasing time: celebrating 30 years a radical dance legend” (Sara Shelton Mann with David Szlasa and Norman Rutherford), Djerassi Artist in Residence Awards, Headlands Center for the Arts Residency 2016, Lifetime Achievement Bay Guardian Award, 10 Women Who Made a Difference, Bay Guardian "Goldie" Award, Foundation for Contemporary Arts Grants to Artists award (2016).
​
​Her Movement Alchemy training is an ongoing teaching project and is influenced by certifications and studies in the metaphysical and healing traditions. Sara’s performance work is a platform for collaboration and research in consciousness.
Register now!
More classes at scdt